Head Studio‘s ‘I Am Ophelia’ show at the GenNext Gala was a standout for me for it’s moody theme and strong consistent styling. You felt the energy in the room change as a little girl walked down the catwalk and sat quietly at the end, waiting. The audience was captivated by the dreamy backing video and hypnotic music. It set the scene for some incredible hair.

Head Studiostarted in Perth, Western Australia in 1988 and now have three salons across the city. Creative Director Marie Cain was nominated for New Creative Force and Photographic Collection of the Year at Hair Expo and I asked her about being a part of the GenNext Gala and how their stunning show came about. 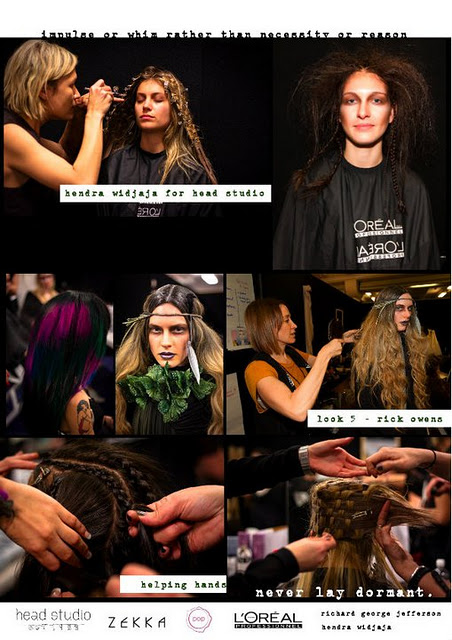 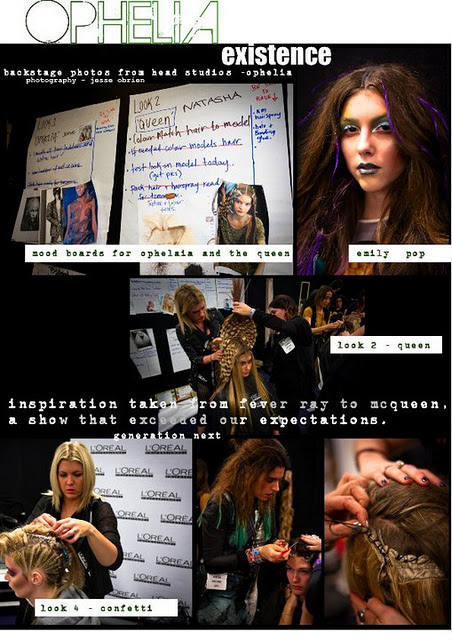 What was the inspiration and story behind the show?

With ‘GenNext’ being our first time presenting ‘head studio’ at Hair Expo, it was an amazing opportunity to showcase who we are, that is a young passionate team with a love for creating beautiful hair and interesting texture, it was really important to us that it translated tostage.

We first fell in love with our track for the show ( fever ray, when I grow up) and then everything really evolved from there. The song set the vibe, it’s very dreamy and youthful, and when we began to create our mood boards a played around with some texture it seemed the perfect fit.


When did you start planning? How many people are involved?

We got a call inviting us to be envovled late last year, so to be honest since then, initially it was figuring out a few logistical issues, (living on the other side of the country was tricky) though collectively with our creative team we really knuckled down in feb/ march.

We had a team of 17 that flew across to Sydney to be apart of the show , we very fortunate to have such a beautiful and passionate team, they were all very excited and so without them it wouldn’t have happened.


Did I see a dress made of hair? Incredible! Where did that come from and how was it constructed?

Haha, yes there was A LOT of hair… As you know the show was called Ophelia, who is the name of a girl, she means to evolve and She is very spiritual, traditionally her character in Shakespeare had long hair, and so we wanted to take that to another level. There was alllot of hair and alllllot of hand sewing envolved, that one look alone took approx 30 hours to construct.

Do you have a favourite hairstyle from the show?

Well as I’m sure you could imagine, after months of working on an idea for a show and then bringing it to life you feel a little numb by the end of it. So on the night we were all a little emotional ( it actually came together hah.) we all had hero looks that we worked on. But I really think that the main look ‘Ophelia’ was a show stopper, and one of our face Perth models Jessie Moloney was under all that hair.


Can you share some of the techniques you used to create the hair?

A lot of the looks we created are like a amplified version of what we do everyday in the salon. There was a lot of hair to bring it all to life, as far as technique there was the obvious such as cornrowing, and a lot of texture setting and then tonging over the top. Our coloring was very time consuming and intricate, with obvious free- hand colour work and dip dying to amp up the popular balayage technique. The one technique I adored was created by our very talented Jess Lay, her hero was the basket weaving and this is her how-to. 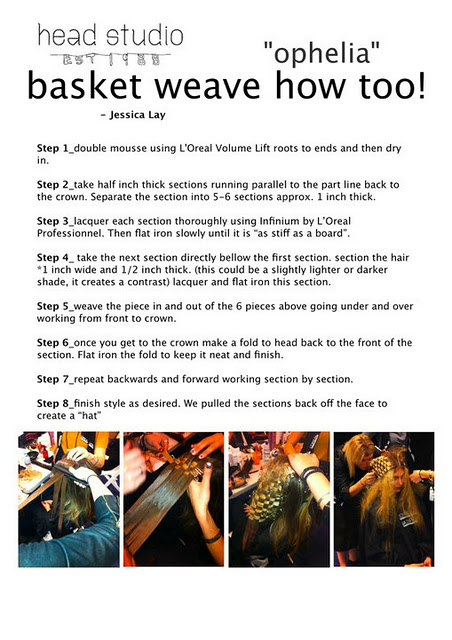 I’d also love to know where your ‘hair romance’ began. How and why did you get started in hair and what do you love most about hair and your work?

My hair romance began probably earlier than I thought, hair runs through a few generations and so it’s something my brothers and I grew up with. Both my mum and Aunty are hairdressers and have been around for a while now ( hah! ;-)) so I feel very fortunate to how accessible it was for me.With a love of musical theatre I was working in the salon with mum and also doing a little bit of hair for local productions, that where I fell in love with styling, to think that through shape and texture you can create and vision from and era or period. And from there everything really evolved.I really believe it’s about the way you can make someone feel great through their hair, you can transform someone so easily in a short space of time. I am motivated my beautiful images and texture and being inspired by the people around me. 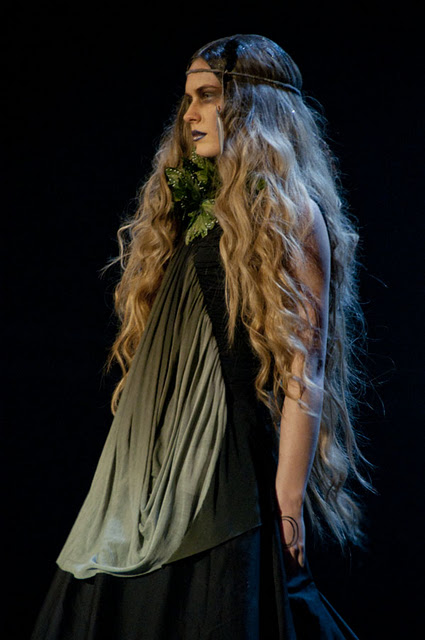 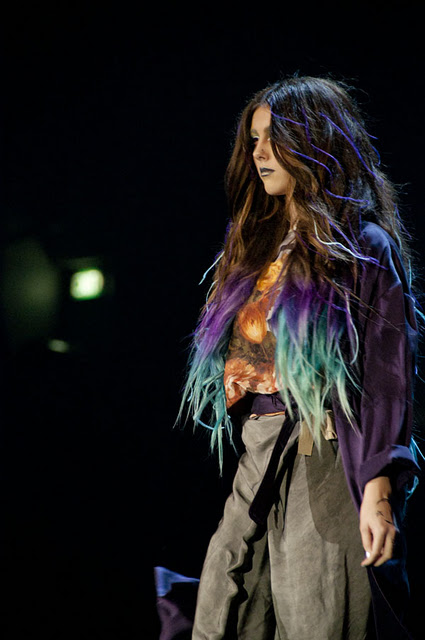 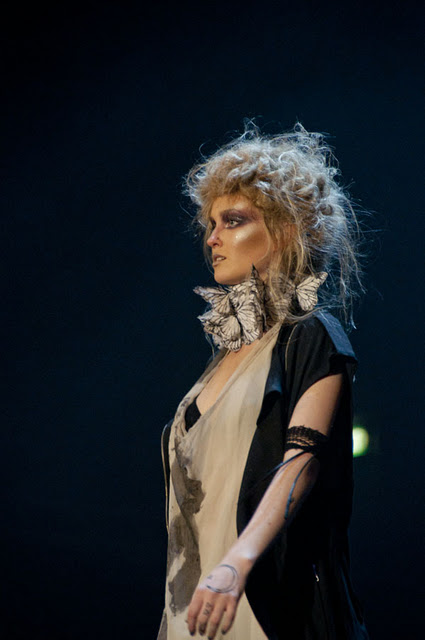 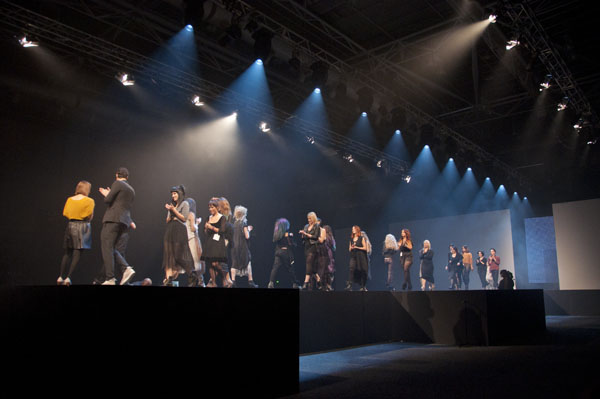 Thanks Marie for an insight into your amazing ‘I Am Ophelia’ show. I love your comment about transforming someone through their hair. I think that’s what great hairdressing is all about.

You can find out more about Head Studio at their website www.headstudio.com.au

Backstage images and how-to from Head Studio.
All other images by Hair Romance.