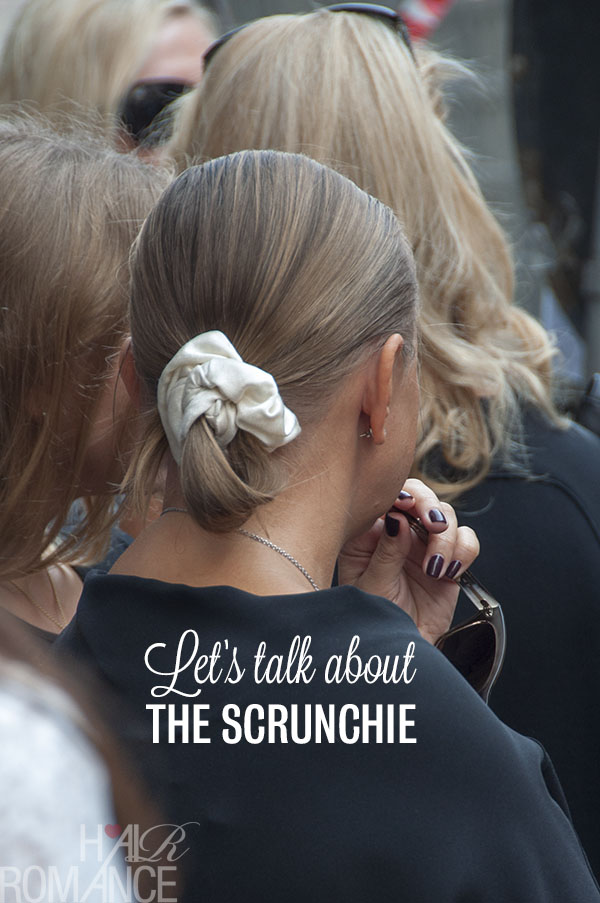 So I’ve been spotting a few scrunchies on the fashionistas on the street during Milan Fashion Week and it concerns me.

I’m not a fan of the scrunchie.

But first I have a few scrunchie confessions…

My first job was making scrunchies.

At the age of six I started helping my sister make scrunchies to sell in her hair salon.

My sister would cut all the fabric and sew the scrunchie tubes and then it was my job to twist them right way around. It’s a tedious job but it was much easier with my little child fingers.

I also made a dollar a scrunchie that sold, which was a very lucrative income for a six year old.

My favourites were the polka dot ones. The gingham scrunchies were also very popular.

Yes, I admit I contributed to the first wave of scrunchie popularity.

I had a scrunchie wardrobe.

Even with my career as a scrunchie maker, I spent most of my profits on acquiring more scrunchies.

I had scrunchies to match any outfit, and had a hierarchy of scrunchies. Velvet ones only for special occasions!

Now I don’t own a single scrunchie. I also am reminded by that scene from Sex and the City where Carrie says no self respecting woman from New York would wear a scrunchie.

I put it out there on facebook and instagram and a few strong voices spoke up in defence of the scrunchie. I’m open to your opinions and would love to hear why you love or hate the scrunchie.