“England Calling” by Stevie English Hair brought the house down at the GenNext Gala at Hair Expo. British hair icons from royalty to rock stars, police to punks – all were sources of inspiration on the runway. It was a tour of English hair history that felt fresh and current. With cool choreography and a flash mob finale, the energy was electric. Just like Oliver, the audience were left saying, ‘Please Stevie, we want some more!’ 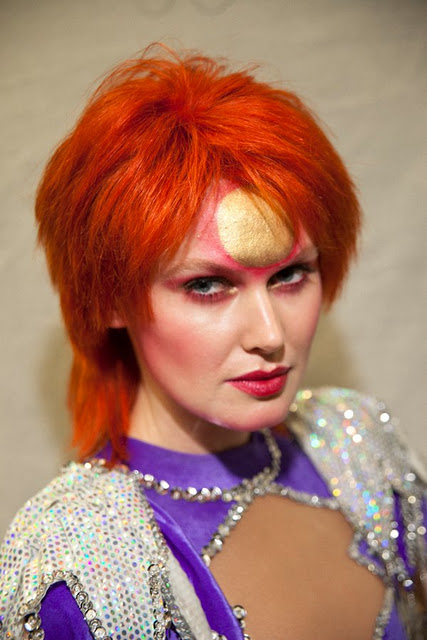 Stevie English Hair opened in Glebe, Sydney in 2007 and was Australia’s first carbon neutral salon. At Hair Expo this year Elly Hanson received a Judges Recognition for her collection for New Creative Force as did Joel Phillips for Apprentice of the Year. Stevie Corthine also received Judges Recognition for Colour Technician of the Year and I caught up with Stevie to find out more about their cool collection. 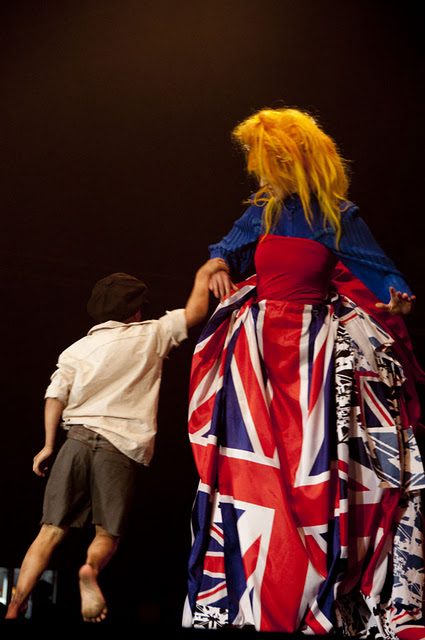 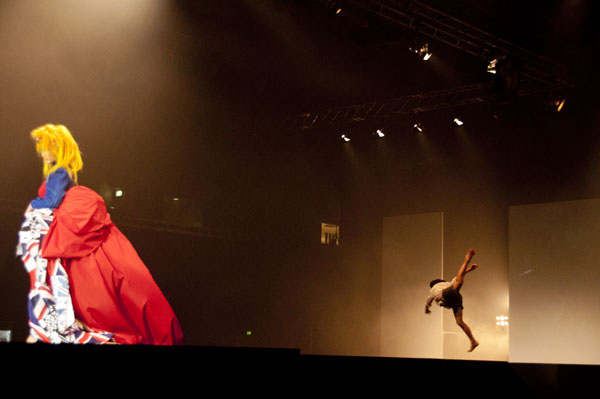 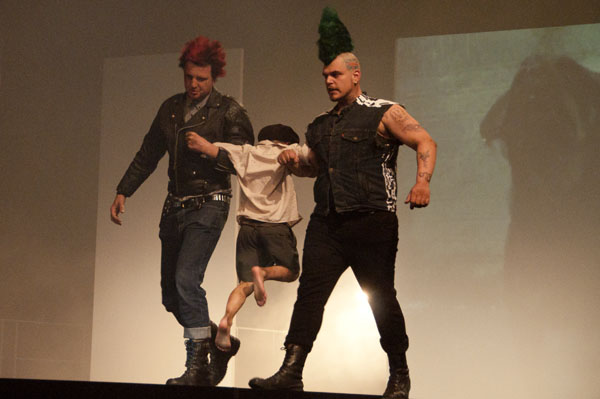 Was this your first show at Hair Expo ?

This was the first time we have been asked to do a show, it was a huge honour. Hair Expo is the largest hairdressing event in the southern hemisphere and to be given the opportunity to showcase our team was amazing. They all work so hard, and the invitation shows that we are on the hairdressing map!

Loved the English theme to your show and I loved the energy. What was the inspiration and story behind the show?

It might seem obvious but we put a lot of emphasis on the brand Stevie English, so the inspiration was “England Calling” which is the best of British cool. Verity, our Creative Director, came up with the looks- Vivienne Westwood, Royal Guards, David Bowie, Punks, Oliver Twist & of course The Queen.

The story was to show off how we are inspired by everything English, but to make sure there was a narrative and direction, not just a collection of models walking down a runway. We are a high energy salon, and we wanted the show to reflect this. Full credit to our models and dancers, they really put everything into it! It sounds wanky but that was genuine energy, and we were stoked to be there sharing our passion our salon to the rest of the hairdressing world.

When did you start planning? How many people are involved?

We were asked if we would do a show in October 2010, our first story boards were rolled out in an art team meeting at the the end of November. All the senior team members had homework over the Christmas break to think what we could do. We shot a collection with Nicole McClusky (who rocks), which was the basis for our show. We have a team of 17 here at Stevie English Hair and all were involved, and we also had Ame Delves and her assistant Sarah Jane doing choreography; 2 stylists Kelly Hume and Mattie Cronan; a Videographer doing our live stream of the prep rooms– we are the first salon in Australia to do this! Add to this 3 photographers including the rad team from CNC Photography doing a shoot which will run in the next HairBiz. It was mayhem backstage, but everyone did their jobs perfectly and it all came together on the night!

So many fabulous hair icons in your show, do you have a favourite British hair idol? What was your favourite look from the show?

I had dreads when I got into hairdressing and as a surfer I don’t pay much attention to my own hair! I love David Beckham for letting his wife give him style my wife has almost given up on me! For women, Daphne Guinness has always had a strong personal style and her hair is her signature, she’s fabulous. In the show…. the Queen who came out at the end was amazing. Verity, Jade and Kirsty are so clever, watching them create that elaborate style was phenomenal. Such a talented team.

Can you share some of the techniques you used to create the hair?

The whole idea of us having the live stream going on was to show people what we were doing, it’s a part of our brand ethos to share what we do, for hairdressers and non hairdressing alike. We had a few wigs, some metal hairpieces for the punks, lots of extensions & lots of hairspray!

I think the concept was the hardest thing, and then the makeup jobs were all quite hard. All the makeup was done by #TeamEnglish – we have 5 talented makeup artists in the salon.

We coloured the wigs and re-coloured them to get them perfect. Both the guards hats were made from sheep skins, we rolled and coloured them. Punk Girl was made from metal and covered with hair, and then braided in – which hurt like crazy – but Paige our model was tough! The Queen was a mass of braids all connected- it was so heavy for the model, but looked fantastic onstage. 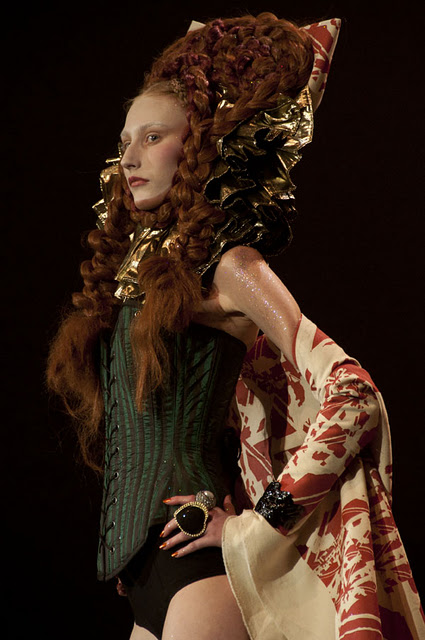 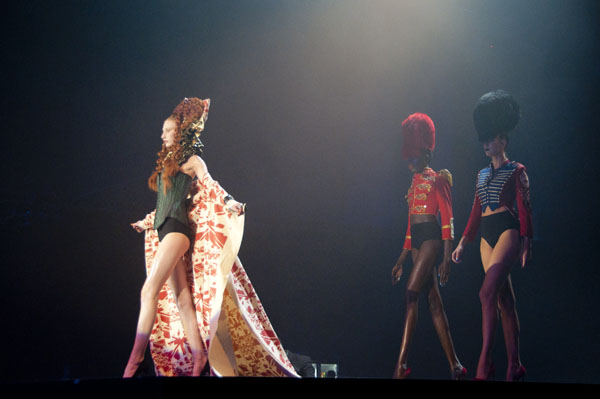 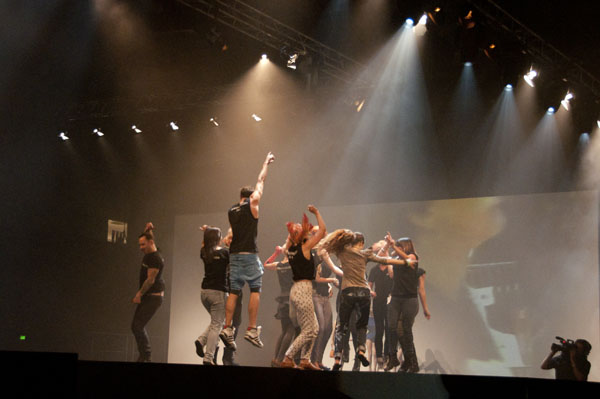 Stevie English Hair is firmly imprinted on the hairdressing map. Their first show at Hair Expo was a standout, full of energy, passion and iconic hair.

Stevie is the most socially connected hairdresser I know. You can find him on Twitter, Facebook, visit his blog and don’t forget to check out the salon!

Plus, if you’re in Sydney and looking for a real change, check out the amazing competition Stevie English Hair is running where you can win a total hair transformation from Team English. Hurry, entries close 14th August.

First image from Hair Expo.
All other images by Hair Romance.