Next week is Mercedes Benz Fashion Week Australia and Hair Romance will be backstage all week bringing you the tips and tricks for the next hair trends.

I love fashion week. It’s crazy, exhausting and not at all glamorous but I still love it. It’s early starts and late nights and editing photos into the early morning so you can publish stories that day but I wouldn’t miss it. In fact I put back my trip to Italy just so I could be in Sydney for fashion week. 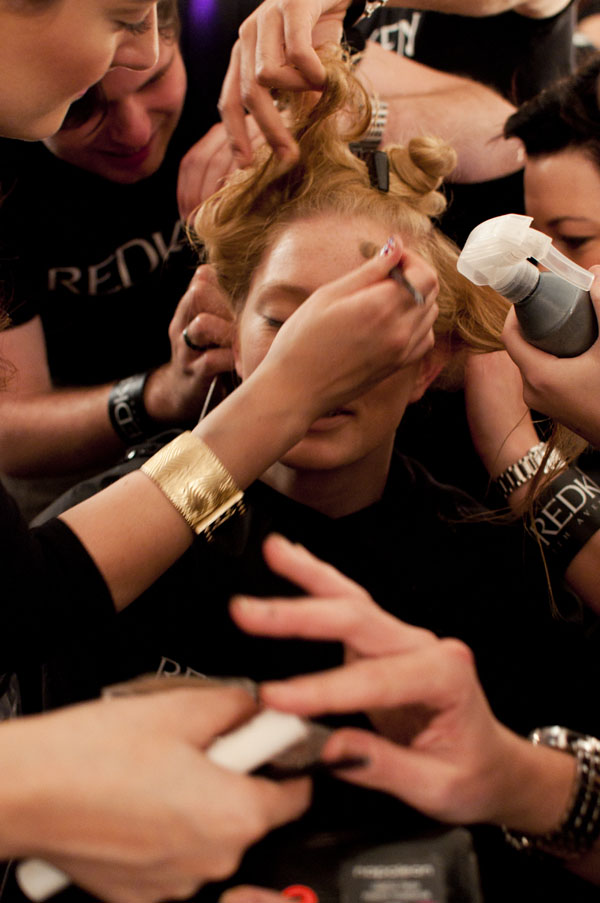 Last year was my first time at fashion week. I didn’t know what to expect and I think that helped me get through the week. Especially as I had just started my 30 hairstyles in 30 days challenge. I would go to a show in the morning, then go to work, grab another show at lunch, go back to the office, and then cover the evening shows. I don’t remember how I got through the week. Maybe the busier you are the more you get done. It’s best not to think about it and just keep going.

Then crazy awesome moments happen. Like seeing fashionistas pose for photos with geriatric man-bladers in the middle of the street, but I’ll get to that later.

I also stood in the middle of the stage in the State Theatre just before the Camilla & Marc show.

But let’s go back a little earlier. I had been running on my energy reserves all week and Thursday was my last big day. I was following all the backstage action (thanks to the gorgeous girls at Tailormaid at the Alice McCall show and I scored an awesome seat in the second row at the start of the catwalk. I could see the models before they entered the catwalk from where I sat. I thought Alice McCall was my last show but I was wrong. 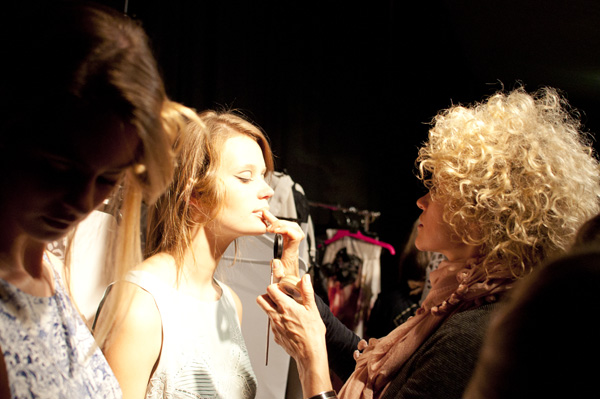 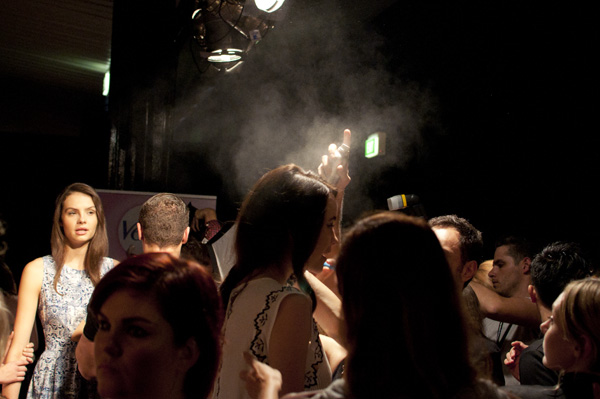 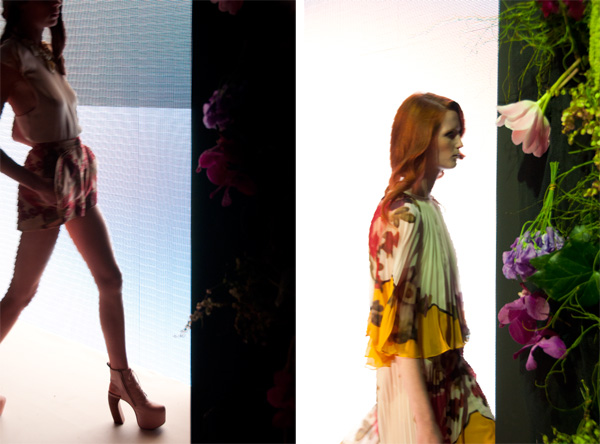 In front of me sat the director for Cloud Nine. I had met her before and she was so lovely and introduced me to her colleague. They were worried about making it to the next show, Camilla and Marc, which was across town starting in 30 minutes. They weren’t from Sydney and weren’t exactly sure how to get there.

From where we sat we would be behind hundreds of people leaving the show and would have had no chance of finding a taxi. With my backstage pass in hand I led them on to the catwalk following the models’ path. We pushed through the backstage crew and out an exit door. Out of nowhere in an empty street a taxi appeared! Straight in, we were off to the State Theatre.

It was a very interesting chat in the taxi ride and when we arrived I wasn’t sure what to do. I didn’t have tickets to the show or media accreditation. Next thing I knew I was handed an all-access pass and was heading inside.

The State Theatre is a beautiful building in Sydney. The ornate baroque interior would be a stunning backdrop to the show. The only problem is the theatre has no proper wing space. We were heading down a maze of stairs and corridors to find our way to the hair and makeup prep. After shooting some behind the scenes the models were rushed to the dress circle, appropriately the wardrobe area for the show.

Of course the show was running fashionably late, and on my own I took a wrong turn and found myself in the centre of the stage. 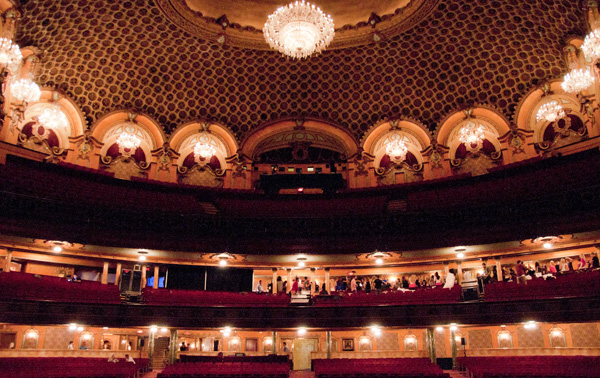 It was quite a surreal moment to find such a space of calm in all the chaos and I stood dead centre to take some more photos.

Then another surprising thing happened.

Three girls also found their way onto the stage. They were on a high after working furiously to get the hair perfect, then one of them noticed my hair. I was wearing this hairstyle. They asked me to take their photo, then she asked me if I was ‘Hair Romance’. No-one had ever recognised me before, and people rarely do because I hide my face a lot, so I was happily caught off guard.

After talking hair some more I left the girls and rushed out to the front of house to get a great spot to shoot the show. The models emerged from a giant glowing arch as the music from 2001: A Space Odyssey played. The juxtaposition of the ornate interiors and futuristic fashion was sensational. 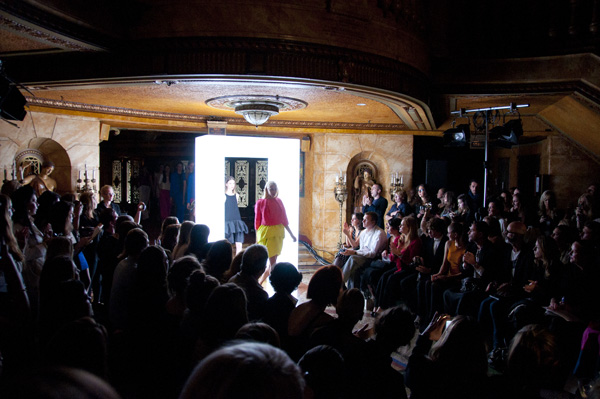 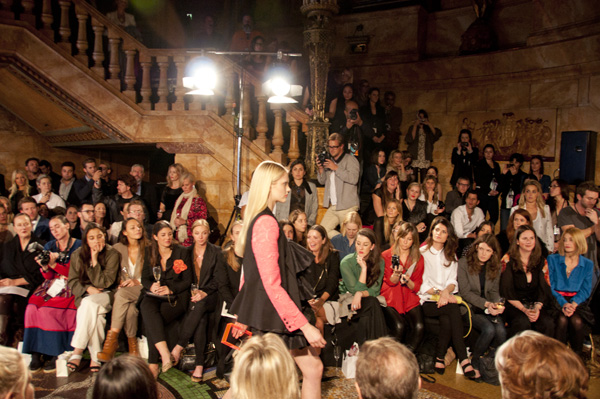 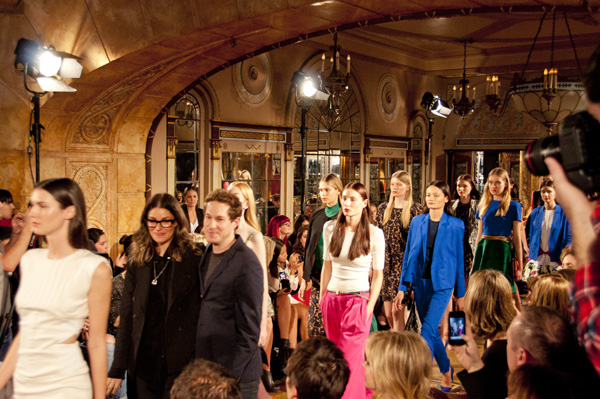 I couldn’t help but use my all-access pass to walk through the arch into the heavily guarded backstage after the show and snap some more pics. Real camera crews were stopped at the arch where as I was running rampant. 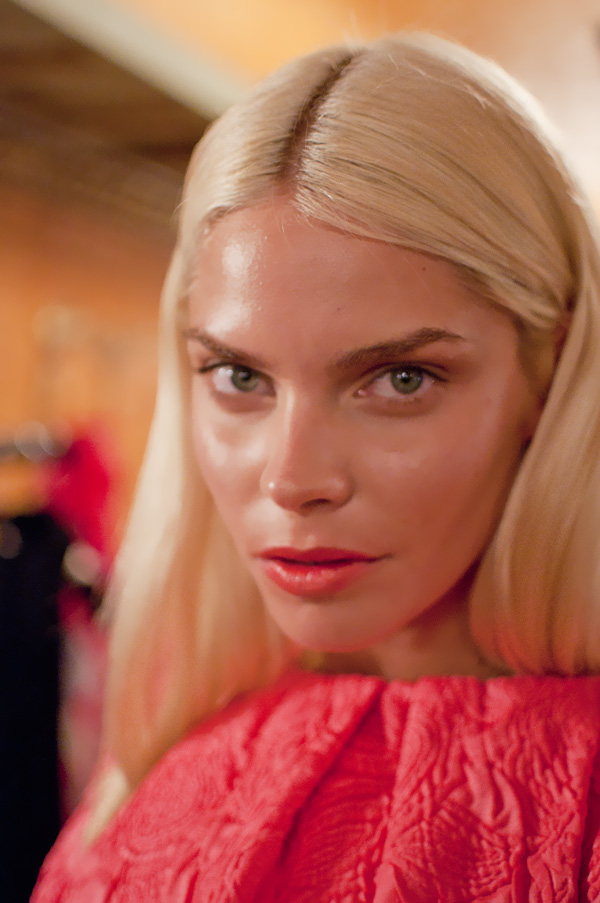 After the show I left everyone to celebrate as I was exhausted and I knew I had so much work to finish. Crossing the street outside I saw one of the strangest things I’ve ever seen.

I heard this grinding sound coming down the street and started to make out a group of men. Old men dressed in lycra on rollerblades. I’m not kidding. There was a pack of lycra-clad septuagenarian man-bladers touring the city just before midnight. Ahead of me was a group of cute fashionistas who were hysterical at the sight of this group. They grabbed the oldest from the group, I swear he was about 80, and had their photo with him. My only regret is that all my gear was packed away and I missed the shot before the lights turned green and they were off into the night.

I wonder what bizarre moments will happen this fashion week.

What questions do you want me to ask the hair directors backstage this year?