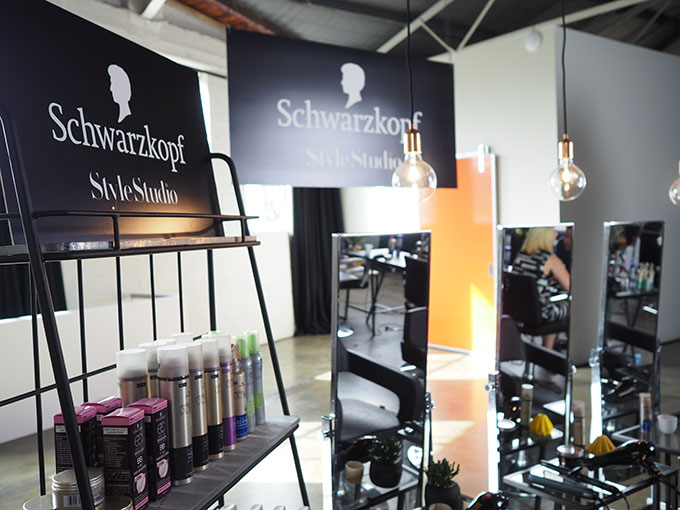 Did you see my post on how to DIY your hair colour? I can’t believe I did it – and the team at Schwarzkopf made it such a fun day I thought I’d share some more from behind the scenes.

Seeing the final results is awesome but with things like this, I am way more interested in what happens backstage. Are you the same? It’s like at Fashion Week, or in films. I adore watching ‘making of’ – sometimes more than the final production. Especially David Attenborough documentaries – seeing the work that goes into those series is insane!

One of my biggest fears is making videos. If you meet me in real life, you’ll see I love talking but as soon as that camera’s on me, I act weird. I keep saying I’m going to make more video tutorials but I just chicken out every time. Or if I do film something, I just delete the talking bits and do a voiceover. Talking to a camera and making it look natural is hard! 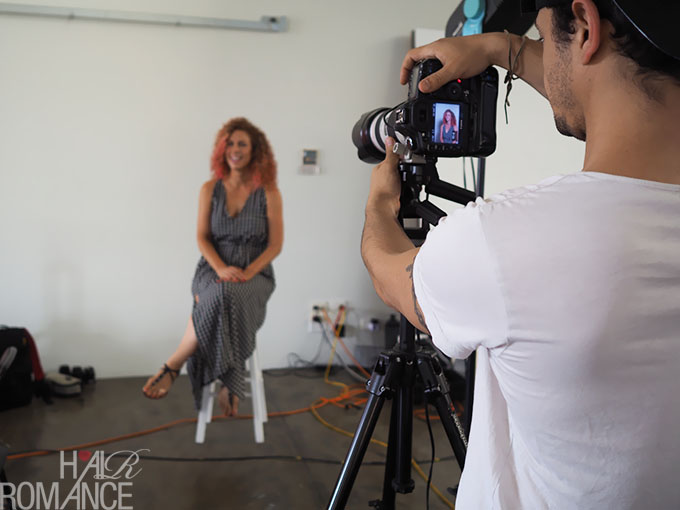 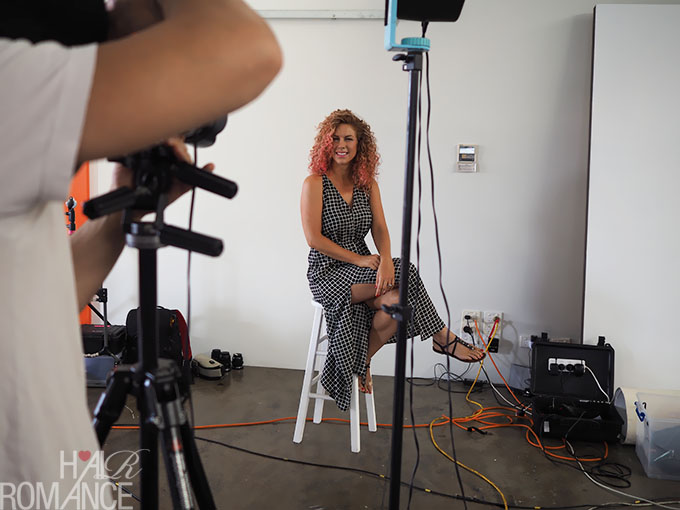 I didn’t tell Schwarzkopf this because I really want to face my fear. I’m sure they realised as soon as they started filming that I was super awkward but they did a fantastic job making me feel comfortable.

I have to admit I cringe when I watch myself on camera but if I’m going to get over this fear and improve, I have to keep trying. So now it’s your job to hold me accountable – I am going to make more videos for Hair Romance. I promise.

But back to the shoot. 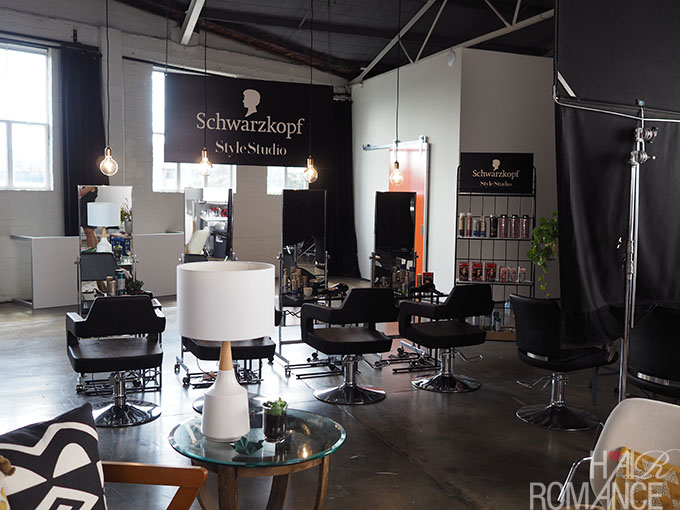 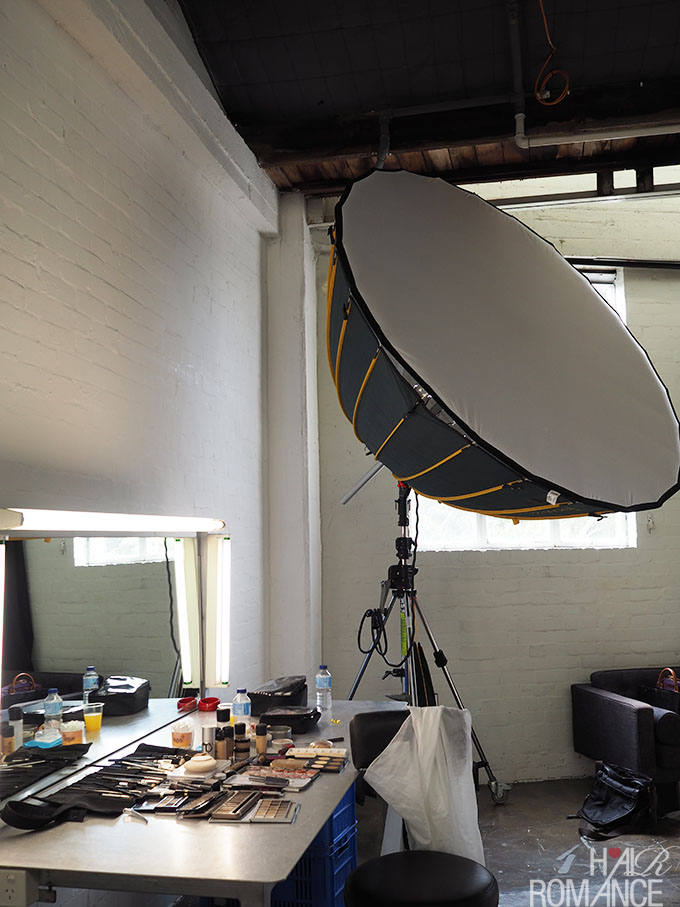 After an intense amount of planning from the Schwarzkopf team there were two long days of filming for all the bloggers involved. At one stage I was going to go platinum but in the end they wanted me to trial the pastel colours and I was thrilled. I love pink hair! 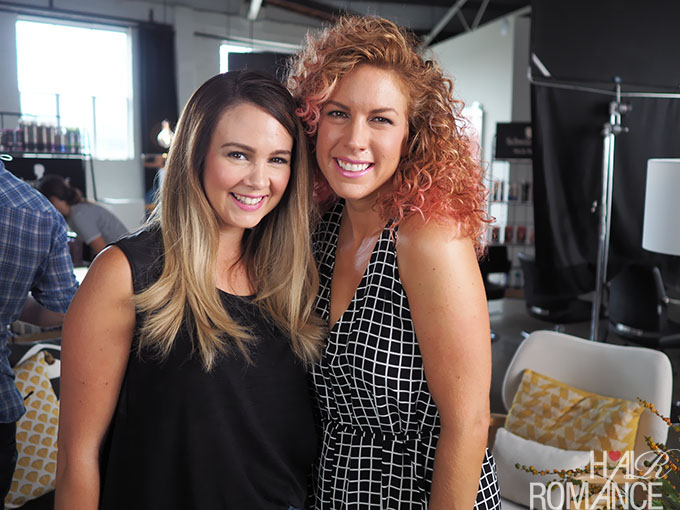 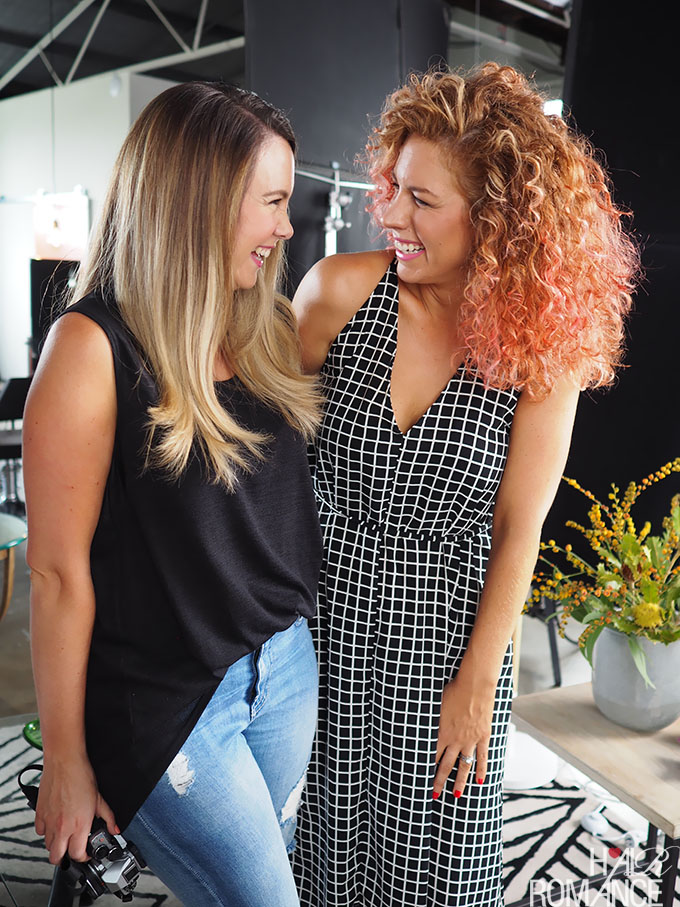 My gorgeous friend Sonia of Sonia Styling was also on the shoot and so we got to hang out in Sydney for the day, which was so much fun. Then it was an early start on set for us. Neither of us had done anything like this before so nerves were high. But having each other there really helped.

They had the salon set up for filming and another lounge area for the final scene where we had to talk to camera. How gorgeous is this furniture? I have a thing for mid-century style. I seriously wanted to take this whole set home for my lounge room. It would suit my home bar, don’t you think? 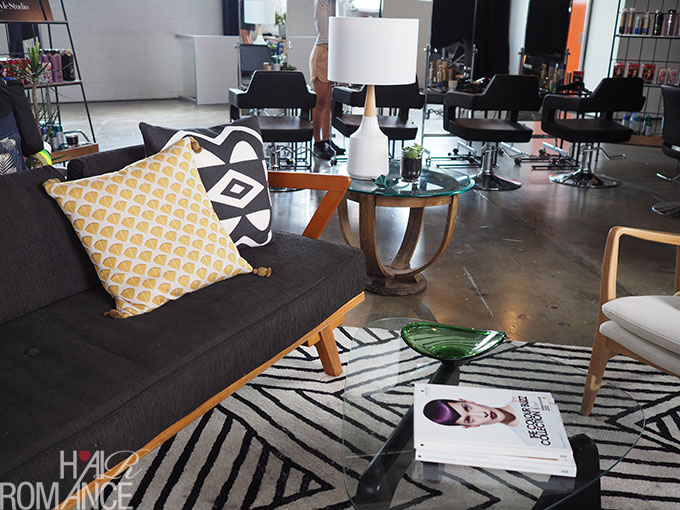 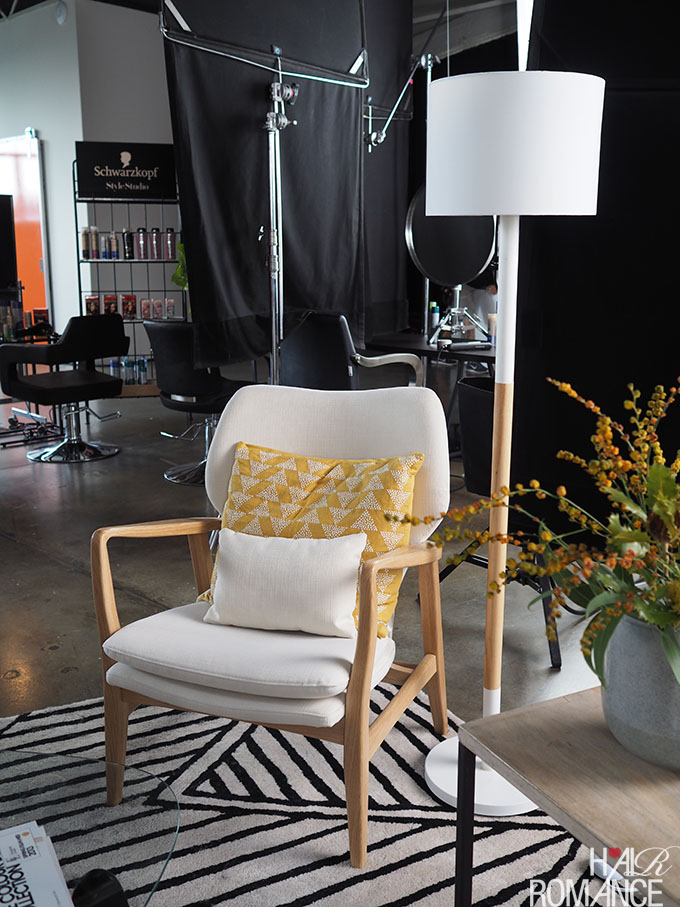 The stylist had rented it all so there was no way to take it home though. Sigh.

There was a fair bit of waiting around as they were shooting so many videos in one day. Of course, we couldn’t help just hamming it up and taking photos while we were backstage. 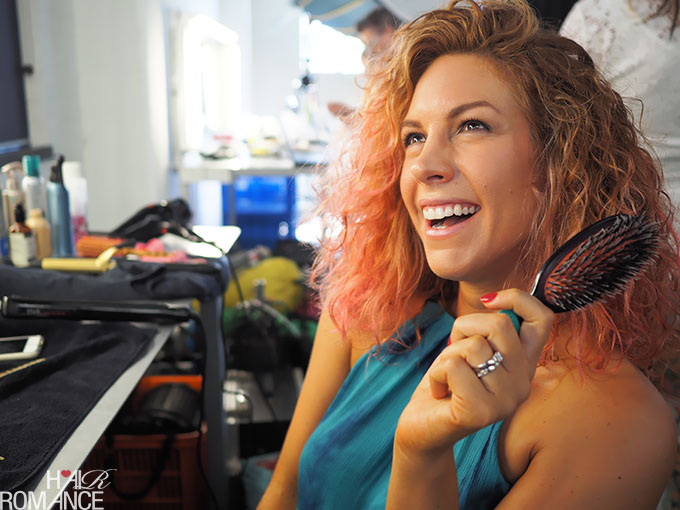 Watching the others do their segments didn’t slow my fears. When it came to me running through everything on camera, it took a few takes. I tell you, the more takes, the harder it is to sound natural!

They would say: “that was awesome, let’s just do that bit again,” and it would not be the same on the next take.

Then I’d need makeup again. Then my face was too shiny (#oilyskinproblems) and so I had to do it all again. Then adjust my dress and do it again. And then just one more with… you get the picture. My fears kept rising but somehow we got it.

As well as the video crew, we also had to shoot all the step-by-step photos and final photos with a photographer. It was a great team and they made it a calm process. Even though I was so nervous inside.

It helped that I just LOVE this hair. It’s so cool. Thanks to Sonia for taking these photos at the end of the day. 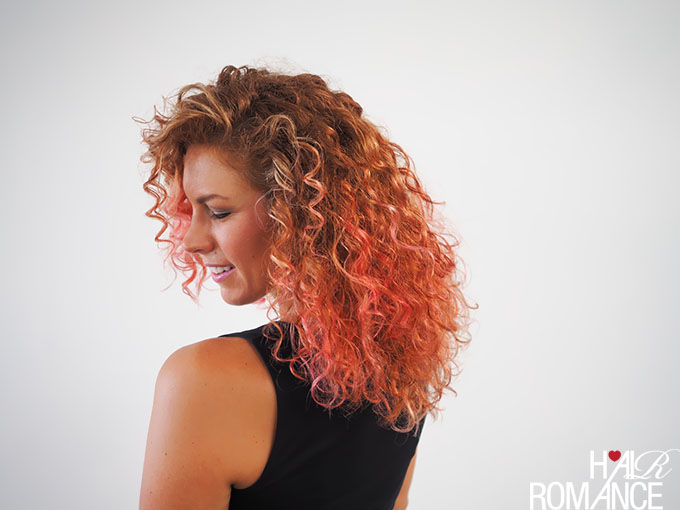 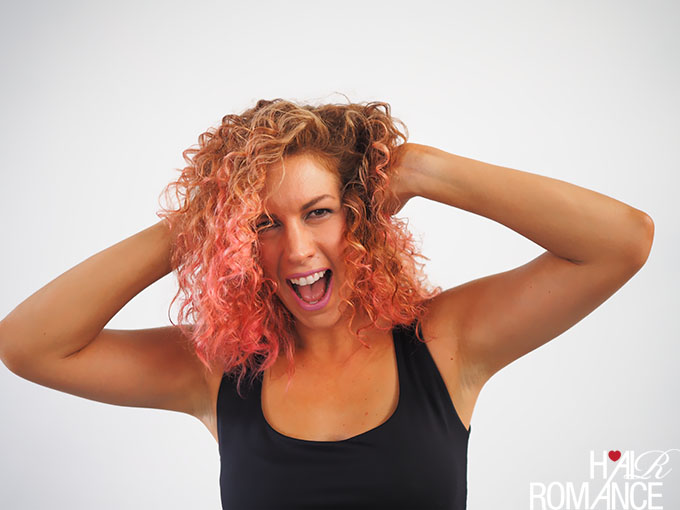 And then after it was done, I got to play with this cute puppy at the studio, and suddenly everything was right in the world. I wish we could have filmed again once I’d played with this cutie. I was so relaxed after that.

That’s my top tip: if you’re nervous, just play with cute animals to calm yourself. 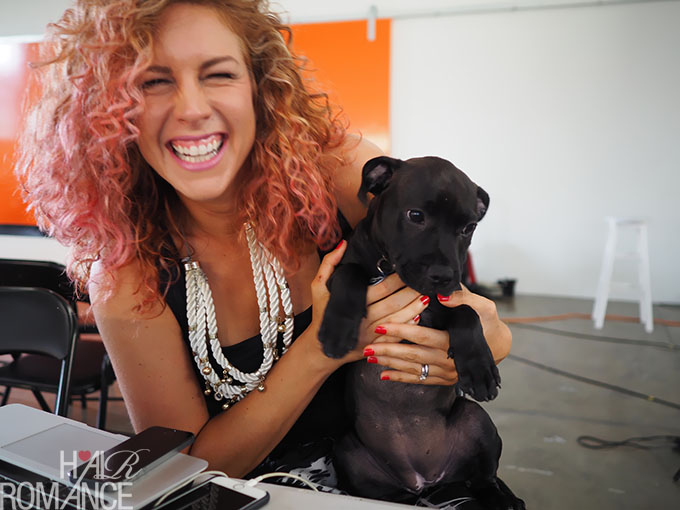 Tell me, do you love behind-the-scenes stuff more than the final results? Would you like to see more videos on Hair Romance? Any advice for me to get over my fears and awkwardness on camera?

« How to DIY hair colour at home (+ GIVEAWAY!)
Dutch braid tutorial for when your fringe is a mess »